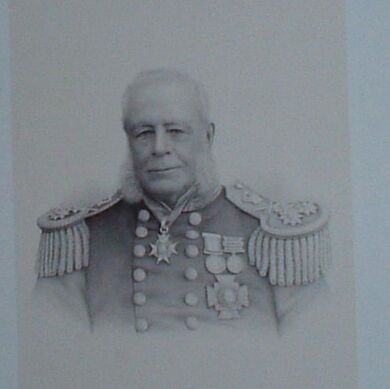 Farquhar came from a long line of Royal Naval officers and joined the Royal Navy in 1829.  He took part in the bombardment of Acre during the Oriental Crisis in 1840

Promoted to Commander in 1844, Farquhar was given command of HMS Albatross in 1846[1] and fought pirates in Borneo in 1849.[2] Promoted to Captain in 1849, he commanded HMS Malacca, HMS Victory, HMS Hannibal, HMS Hogue and HMS Lion.[1]
Farquhar was appointed Commander-in-Chief, Pacific Station in 1869 and Commander-in-Chief, Plymouth in 1878. This last post was one of the most senior in the Navy at a time when the Royal Navy was the world's greatest navy. He retired in 1880.[1]   During his career naval technology moved from full-rigged ships such as HMS Victory which Farquhar commanded, to steam-powered vessels driving first paddles and then screws.
In 1851 Farquhar married Ellen Rickman and settled at Drumnagesk, Dess by Kincardine O'Neil. The couple had nine sons and four daughters and you will find many of them commemorated in Christ Church. Several of the sons served in the Royal Navy.

Sir Arthur Farquhar was one of the key founders of Christ Church in the 1860s and descendants of his continue to support the church to this day . The church bell was donated in his memory by his children.

Obituary from The Times - 31st January 1908
We regret to announce the death, at Aboyne, Aberdeenshire, on Wednesday evening, of Admiral Sir Arthur Farquhar, K.C.B., in his 93rd year. Sir Arthur was a son of the late Rear-Admiral Sir A. Farquhar, K.C.B., K.C.H., who in the year of Trafalgar made a gallant defence of the bomb Acheron against a superior French force, and in 1815 was the senior officer of a squadron which assisted at the capture of Cuxhaven and Glückstadt.

Sir Arthur Farquhar, who was the senior admiral on the retired list, entered the Navy on March 13, 1829, and passed his examination in 1835. For his services as mate of the Princess Charlotte, 104, the flagship of Admiral Sir Robert Stopford, during the operations on the coast of Syria, including the bombardment of Acre, he was awarded a commission as lieutenant, bearing date November 4, 1840, or the day after the bombardment took place. He was afterwards appointed, August 28, 1841, to the Excellent, gunnery ship at Portsmouth, Captain Sir Thomas Hastings, and subsequently served in the Tyne, 26, the Caledonia, 120, and the Volage, 26, as flag-lieutenant to Rear-Admiral William Bowles. In December, 1844, he was promoted to commander, and two years later posted to the command of the Albatross, 16, on the coast of Africa. In 1849, when it was decided to despatch an expedition against the pirates in the Borneo Seas, he was placed in command of the small force detailed for this work, having with him the Royalist, Nemesis, Ranee, and a small native flotilla under Rajah Brooke. The force first took up a position at the mouth of the Sarebas River, but later on, on hearing the pirates were off the coast, preparations were made for action, and on June 31 they were attacked, and 70 prahus driven on shore. He afterwards destroyed a number of the pirates' haunts in the neighbouring rivers, and taught them a lesson so severe and wholesome that it was not forgotten for many years. For this service he was promoted to captain on October 27. In 1854 he commanded the Malacca, 17, a corvette on the North American and West Indies Station, and in 1866 was raised to flag rank. From November, 1869, to July, 1873, he was Commander-in-Chief in the Pacific, and on his return home was promoted, in April, 1873, to vice-admiral; and in 1878 to admiral and appointed Commander-in-Chief at Plymouth, which post he held until 1880, when he retired from active service.

​The admiral, who was a D.L. [Deputy Lieutenant] for Aberdeenshire, wore the Syrian and Turkish medals with a clasp for Acre, and was made a K.C.B. in 1886. He married, in 1851, Ellen, a daughter of Mr. S.P. Rickman, who died in 1898; his eldest son, Rear-Admiral A.M. Farquhar, commands the Portsmouth Division of the Home Fleet, his second son, Captain R.B. Farquhar, is Chief Inspector of Naval Ordnance, his sixth son is Captain S.St.J. Farquhar, of H.M.S. Doris, and another son is Major Moubray G. Farquhar, D.S.O.