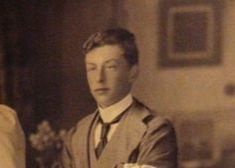 Frank Pickering was born in August 1881 and was educated at Eton where he achieved both distinction at his sporting skills being both a cricketer and footballer (First Eleven) as well as notoriety for his misdemeanours.  On the walls of Kincardine Castle hang, not one but, two birches which were used to beat him. Apparently the sum of half a guinea (10/6d) was added to the miscreant’s school bill on each occasion ‘for extra tuition’ – but there was the compensation of being allowed to keep the birch. They are rather dried up now but one needs little imagination to think how actively wielded freshly made birches must have hurt on a naked backside. What crime deserved such punishment? Rumour has it that it involved some boys from Eton’s rival school Harrow and some buckshot which somehow peppered their backsides.

Frank was commissioned into the Royal Scots Greys in 1901 and departed shortly afterwards for South Africa where he served in the Boer War winning the Queen’s Medal with four clasps for his services.

A tremendous welcome was prepared for him when he returned, wounded, to Kincardine in September 1903. An evergreen arch was formed over the entrance gates sporting the words ‘Welcome Home Again’ in flowers. At the gates there were speeches and cheers.  The scholars presented an address to Mrs. Pickering congratulating her on her son’s safe return and thanking her for her support. The horses of the carriage were then unyoked and ropes attached and a procession formed and, with tenants, feuars and villagers pulling the carriage and the others following behind, everyone proceeded up the drive to Kincardine (see header photo).

From 1907 to 1909 he was an extra ADC to the Governor-General and Commander-in-Chief in the Dominion of Canada. In 1910 he married Angela Sutton at a glittering London society wedding.  They later had two sons.

During the Great War Frank saw service on the Western Front in 1914 and in Gallipoli during 1915-16 and on returning from that disastrous adventure took a safe staff job for a time. Safety and staff jobs were, however, not for him and he asked to return to the front line. In 1917 he was in action once more and survived the horrors of trench warfare during the spring and summer. By December he was an acting Lt. Colonel in command of a Service battalion of the Rifle Brigade having won a DSO earlier in the year. On 23rd December he and his Adjutant were approaching the front at Passchendaele Ridge near Ypres when they were both killed by a shell.

The temporary wooden cross from his grave in Belgium stands now in the chancel of the little Scottish Episcopal Christ Church in Kincardine O’Neil above a commemorative brass plaque.  The damaged nature of the cross is a poignant memorial for all those killed in combat. Quite how Frank’s mother, Mary Pickering of Kincardine, was able to recover the cross is explained below. Frank’s two children survived without offspring.  Frank’s great, grand-nephew Charlie Bradford serves currently in the Royal Scots Dragoon Guards, the successor to the Scots Greys.

Wooden War Grave Markers
Over the lectern at Christ Church stands a poignant memorial to all those who lost their lives in the Great War. It is the simple wooden grave marker of Lt. Col. Frank Pickering. If you have wondered how it came to be there – read on.
During the First World War as the conflict slowly ebbed and flowed across the continent efforts were made to bury and mark as many graves as possible either where men fell, or if conditions allowed for removal either during an action or after the dead were moved to cemeteries set up along and behind the line. Burial of the dead is an old human ritual which extends beyond decency, It marks the disconnection between the living and the dead as part of the process of grieving and separates us from those lost. These crosses and markers are talismanic of those distant burials.
Burial in situations in the field went beyond these ritualistic requirements; it prevented the lowering of morale; improved hygiene and living conditions and prevented disease. The sheer volume of dead during offensives often involved hasty burials sometimes in situ. Graves were marked for later identification where possible. Markers varied from a simple stick or broken rifle pushed into the ground to army regulation markers, and extend to carved and ornate hand-made memorials, sometimes made by local tradesmen or friends of the deceased produced in the field from scrap wood or packing crates.
Fabian Ware set up the Graves Registration Commission during the early years of the war, introducing methods of cataloging these battlefield burials. Gradually over time the cemeteries grew some becoming overwhelming, with many small groups of burials scattered across the various front lines that marked the passage of the war. Some burials were lost in subsequent shelling, further complicating the process of tracking the graves. In 1917 Ware was made Vice Chairman of the Imperial War Graves Commission, his legacy continues within The Commonwealth War Graves Commission.
Both during and beyond the immediate war years there were attempts to consolidate these burials into the larger concentration burial grounds we see today marking the landscape of the Great War. What has really changed is the way the graves are marked. Under the authority of the Imperial War Graves Commission the old wooden markers and crosses were gradually replaced with the familiar regularity of the gentle curved top and squared angles of the Portland Stone markers which form the familiar patterns of burial and commemoration we recognise from CWGC cemeteries. These stones are now synonymous with our identity and continue to mark burials from all conflicts since their inception after the armistice at the end of war to end all wars.
During the process of replacement with headstones some efforts were made to offer these wooden crosses to the families of the people whose graves they originally marked on the front. The family were responsible for shipping them home or collecting them. They were equally responsible for the final location. A huge number were given to churches, sometimes there are collections of them such as at Cavendish in Suffolk. Despite the cost of returning these crosses there are examples of them still in existence from nearly every army rank and a diverse range of regiments across the whole country and indeed across the world. It would appear that the vast majority of these wooden markers were destroyed in situ, often burnt near the cemeteries, the ashes sometimes scattered across the burial grounds or left in the field to dissipate. Sometimes the metal tags that marked the name, ranks and serial number on many of the crosses are still found in the fields along the Western Front.
A project to list these wooden memorials is under way - http://thereturned.co.uk/  - and information on the cross in Christ Church has been submitted.